Virtually all Geological Survey Organisations in Europe perform 3D geological modelling as part of research projects related to groundwater, mineral resources or geothermal energy. As to the systematic 3D mapping of the subsurface, ten countries / states in Europe stipulate 3D geological models by legal mandate. Only in four of those, there also are legal requirements to follow national standards for 3D data models. While most geological surveys carry out geological modelling by employing their own staff, some have outsourced the task to research institutes and/or universities.

Although some modelling activities were undertaken already in the eighties and nineties, the majority of geological survey organisations started 3D geological modelling between 2001 and 2010. Up until now they spent up to ten person-years on modelling. By the end of 2014, well over half of all the participating countries have covered at least 21% of their area with regional scale geological models, a third even reach over 60% areal coverage. Regional scale models are defined her 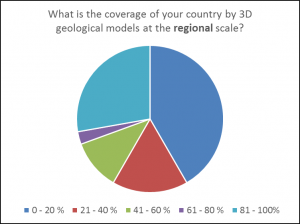 e as based on deep boreholes and seismic data, extending further than 1 km into depth and comprising a few mayor units. By contrast, local scale models (based on shallow boreholes, extending some 100m into depth and used for groundwater studies, tunnelling projects etc.) cover less than 20% in most countries. Results of the survey show that there is no correlation between the start of modelling activities and areal coverage, i.e. countries which started early have not necessarily covered more of their surface with 3D models. However, there is (not surprisingly) a correlation between the number of person-years spent on modelling and areal extent.

Modelling the subsurface is a process which includes field mapping, 2D-map creation, construction of geologic sections, compilation / processing / interpretation of subsurface data such as boreholes, seismic sections or structural maps, formatting and importing of subsurface information into your modelling software, and finally modelling per se. When reporting on financial and human resources spent on modelling, participants were asked to consider only those steps which involve interpretation and modelling of subsurface data, such as borehole validation / selection for model input, geological profile construction, seismic processing, data formatting / importing into your modelling software, and modelling itself. For this, the vast majority of geological survey organisations spent up to 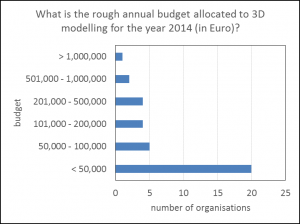 50,000 € in 2014, regardless of their budget. Again not surprisingly, those who spent more have by now covered more area. As to the sources of funding, a large majority of geological survey organisations receive over 80% of their modelling budget from government sources. However, a sizeable minority of organisations (25% of participating countries) fund their modelling activities with mostly non-governmental money. With a few exceptions, relatively little money seems to go into software licences, programming or model dissemination. As percentage of total modelling budget, on average 60% are spent on modelling per se, while 10% go to software licence fees, 10% to programming and 20% to model dissemination.

The range of software packages used for modelling at Geological Survey Organisations in Europe is very diverse. In total, 16 programmes were reported in use with almost half the participating survey organisations using Gocad as (one of) their modelling software. 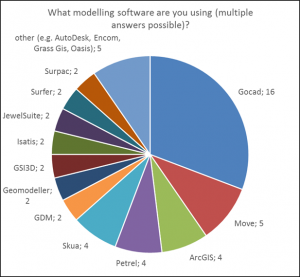 The online survey and this report were prepared by the Geological Survey of Austria (S. Pfleiderer) and the British Geological Survey (H. Kessler) following an initiative developed at the 2nd European meeting on 3D geological modelling in Edinburgh, Scotland, in November 2014.

A complete analysis of the survey including the original questionnaire and graphical presentations summarising all results can be downloaded here.

For information on further activities, visit the site of the Open 3D Geological Modelling Community on Linkedin.