Final Meeting of the PanAfGeo Project 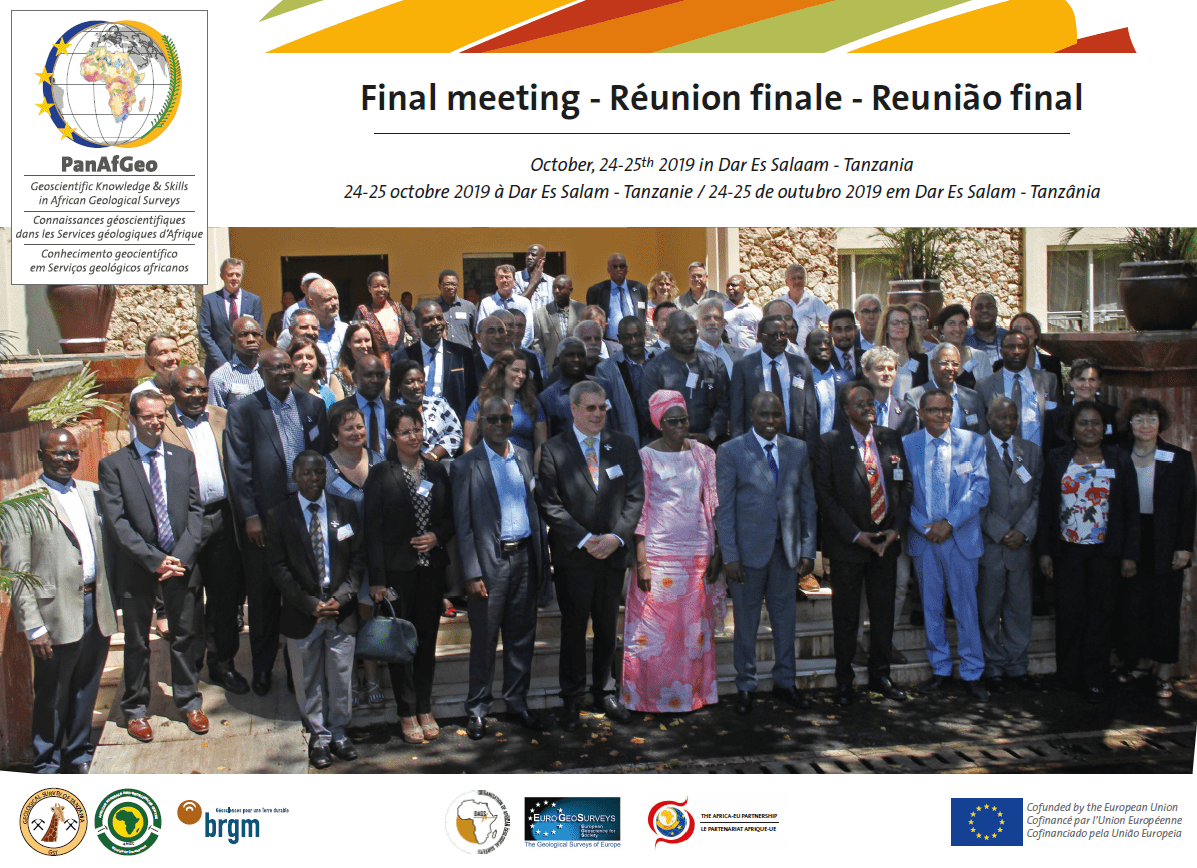 On 24 and 25 October 2019, about 70 PanAfGeo partners from around 50 European and African countries gathered in Dar es Salaam, Tanzania, for the Phase 1 closing meeting. The Ministers responsible for minerals in Tanzania and Kenya were the guests of honour. Attendees included some of the project’s main contributors: OAGS Executive Committee members, stakeholders and representatives of Geological Surveys in Africa and Europe and the European Commission.

PanAfGeo increased the technical competence of 1,074 trainees from 49 African countries (all except Burundi, Libya, Mauritius, Seychelles and Somalia). No other EU programme so far has ever had such a cross-continental geographical coverage, overcoming language (trainings in three languages: English, French, Portuguese), cultural and political barriers.

The European Commission’s intention of increasing attention for more effective cooperation with Africa has therefore been fully met by PanAfGeo Phase 1, through its geoscience training programmes for officers of African Geological Surveys. The programme has clearly strengthened the partnership between EU and African countries in several areas, bringing substantial benefits to the societies in Africa and, indirectly, in Europe, through the establishment of stable institutional relations based on mutual trust and respect. The consideration of many African Ministers being present at various PanAfGeo events proves the impact generated at the highest decision making and political levels.

Nevertheless, there is always room for improvement and the framework of possible work packages for PanAfGeo-2 were discussed at the final meeting in Tanzania, with an emphasis on additional activities that would lead to increased (institutional) capacity of African Geological Surveys. The key ambition is to align as much as possible with the new European Commission priority ‘A stronger Europe in the World’, by putting in place a more comprehensive and ambitious strategy for PanAfGeo-2 itself. One possibility might be offered by establishing a collaboration with other complementary projects (such as GMES Africa) in order to achieve synergies in land and geo-resources management. The latter is closely linked to climate change adaptation goals that are tackled within the proposed EU Green Deal, another of Ms U. von der Leyen’s priorities as President of the European Commission. The cooperation between European and African Geological Surveys within PanAfGeo-2 will further strengthen the geological sector at government level in Africa and will, therefore, allow for the increased capacity in managing geo-resources and environmental matters by national administrations. This represents a step forward in the political commitment to the development of EU-Africa cooperation as described in MIP Pan-African 2018-2020.